U900: A cute Japanese 'character' band with real people inside

One fine day in 2009, a rabbit and a bear met in a Tokyo park and decided to form a band called U900, releasing cover tunes on YouTube and MySpace.

These videos show stop-animation of the rabbit (Usagino U) and bear (Kumano Kulele) rendered in crochet as they play cover hits by the Ventures, Michael Jackson, and the Beatles.

Since then, this cute character duo has become popular globally, but especially so in Japan and other Asian countries, playing live in Hong Kong and Taipei. They've released several CDs and a DVD of their TV show, and their likenesses appear on signature ukuleles.

As a ukulele performer and researcher of Japanese brand- and mascot-related character phenomena, I follow U900's growing success and have been surprised to see the human performers behind Usagino and Kumano emerge over the years.

This evolution is extremely unusual for Japanese character-based celebrity, since maintaining the character's appeal usually involves denying that there is a human inside the costume. The most famous Japanese local PR (local public relations mascot, often called "yuru kyara") character is Kumamon; as I was told by his office, "the thing you see is his flesh and blood." Not only will the human inside never be revealed; their existence is completely denied.

And I doubt the self-made unofficial mascot Funasshii, a "pear fairy" who appeared in Funabashi in 2011, will shed his pear suit either. Just as the man behind the curtain was revealed as the Wizard of Oz, the brand identity of these living characters would be destroyed if they were unveiled.

Celebrities can, however, be rendered into comic form. Already-famous persons get cute character versions of themselves, such as former Prime Minister Junichiro Koizumi.

U900 are both celebrities dressed up as characters, and characters dressed down as humans. In both guises they gain popularity by performing "cute" culture. They play the ukulele because "it's tiny and cute," and so are they, dwarfed by the chair and the mike in their studio.

While "cuteness" is associated with Japan, it has also been taken up by a global audience. UK blogger "Uke Hunt" awarded U900's cover of Diamond Head "Video of the Year" in 2009 and interviewed the creator of U900, Yosuke Kihara.

In 2011 their cover of Twist and Shout appeared on the US website BoingBoing. They also appeared in an Israeli cellphone advertisement, film festivals in New York and San Francisco, and at Puck, the "world's smallest cinema."

Encouraged by their success, soon Johnson Liu of Anuenue Ukuleles wanted to create ukuleles laser-cut with their image. While Kihara and Liu aim for a children's market, the blend of cute characters and ukuleles is also apparently unproblematic for Japanese adults. While conducting fieldwork, I saw U900 ukelele models carried by middle-aged men and couples at "Ukulele Picnic" events and a wee "Baby Rice Ball" model played at a lesson I attended at the PoePoe Hawaiian Culture Center by a male retiree (the demographic in Japan least likely to own character goods).

Other brands have noticed this trend and are taking advantage of the market. 'Famous' brand ukuleles are emblazoned with both Hello Kitty and Kumamon, and cute uke goods are becoming more common.

I met with Liu at his Taipei headquarters in June 2015 and learned that the U900 ukelele models are popular throughout Asia including Korea and Thailand, places where the band has yet to perform. He's even found Chinese counterfeit models for sale online.

Liu said the U900 line has not fared as well in the mainland USA, based on accusations that Usagino U resembles a blackface character. Nonetheless, he continues expanding the line of U900 ukes and accessories.

It turns out that this is no random indie band: Usagino U is the character designer and music lover Yosuke Kihara, aka Kerokeroking, known in Japan for the Fuji TV Ponki Kizzu children's program character Go Go Coni-chan.

Kihara worked for a rock music magazine while a student. He's created parody tee shirts for the Summer Sonic music fests, including Pharrell Williams as Nyarrell the cat in 2015.

Kihara was surprised by Liu's proposition to make U900 ukelele models, and is still amazed by U900's ongoing success. He was shocked by the blackface speculation, stating that Usagino U is simply a rabbit made from black wool he had on hand.

The human inside the bear Kumano 900 is Hiroyuki Nariai, a music producer who plays melody for the duo. Multitalented, he teaches ukulele workshops and makes colorful kirie cut-paper art. Okayama Akihisa is the rat character Nezumino Akihisa, with a washboard rig or a mini drum set. Kihara's daughter KANAE used to join them on stage on vocals; now a busy teenager, she is replaced by an iPod referred to at live events as "the karaoke."

KANAE's disembodiment is one part of the band's evolution from a character performance act with live music to a band that has its own characters. Their costuming also shows this. Early on, the two men dressed as the characters, wearing large headgear that obscured their faces. KANAE stood between them. This lineup of a young woman accompanying costumed characters is typical of mascot character appearances in Japan.

By 2011, other people on stage wore U900 full-body suits and the men wore baseball caps with attached faces made of posterboard. In their most recent performances, they wear baseball caps fitted with small crocheted character heads, U900 CD promo tee shirts, long shorts and sandals.

Nariai's versatile musicianship is another part of the de-characterization phenomena of U900. He and Okayama played rock tunes for about an hour after U900's 2013 "Ukulele Picnic" gig at the Vox booth next to a cardboard cut-out of Brinyan Jones. Brinyan, Kihara's parody of the Vox player Brian Jones of Rolling Stones fame, appeared on a VOX electric uke and in the U900 kiddie TV show, Ukulele Hikimashoo ("let's play ukulele" show).

Continuing this trend to highlight the human celebrity rather than the character, in 2015 Nariai played at Summer Sonic and elsewhere without Kihara as "Cheap Purple" and released a CD of rock covers with other musicians under his own name in fall 2015.

And in 2015, just before the kigurumi had been led from the stage to escape the August heat, the band also shifted away from its U900 roots. Seiji Katsu, a famous ukulelist, joined them, receiving his own "cat" hat. They all sang a cover of the Carol's 1970s hit "Louisiana," without KANAE's vocalizations, which they had performed at other venues that summer as well.

This song, not part of the U900 anime repertoire, was well received by the audience, mostly middle aged men like the players. It was also a shift away from globally famous cover tunes.

This evolution is also detailed in the stories Kihara and Nariai tell about their band at their U900 gigs, or in radio or printed interviews. These narratives have also changed over time from simple tales of a rabbit and a bear making music in the park to insights on how Tokyo creatives collaborate.

Following U900's activities over the years has revealed a network of media-oriented people, places, companies, and events among the art and music scenes. And though the anime-related side of their activity is booming, their live performances show an increasing divestment from identification with the characters in favor of the performers themselves.

In an age where so many things devised by humans in Japan increasingly come to be represented by a cute character—even the new social security number system—it is impressive to see how U900 manages to have it both ways. They may be loved for the characters they render musical, or appreciated as musicians in their own right.

U900's human quality may be all the more important in the global marketplace, in which cute characters are not always appreciated as they are in Japan.

This evolution is extremely unusual for Japanese character-based celebrity, since maintaining the character's appeal usually involves denying that there is a human inside the costume. 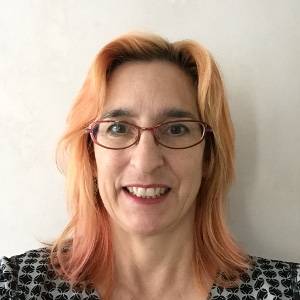 Debra Occhi is a linguistic anthropologist and a professor at Miyazaki International College in Japan. She received her PhD from the University of California, Davis, in 2000. Debra writes mostly about Japanese language, culture, and anime, but she has also been known to reflect upon the roles of flowers in Japanese culture and changing notions of love and romance.

U900: A cute Japanese 'character' band with real people inside

Made in Japan: Studies in Popular Music by Toru Mitsui (2014, Routledge)