How your gourmet coffee habit affects the livelihoods of producers

Americans are drinking much less coffee than they did in the 1940s and 1950s — down by almost half from a peak in 1946. And such changing trends in Northern countries have profound impacts in the global South where coffee is produced.

The sharp U.S. decline has levelled off in recent years, buoyed by a dramatic rise in speciality coffee (defined as scoring above 80 on a 100 point cupping scale). The very best of these speciality roasts are what the cognoscenti term "Third Wave coffees."

Retailing for $20-$50 a pound (and going much higher), third wave coffees usually come from single farms, with provenance, terroir, and cup quality discussed in the language of fine wines. Coffee's complex flavour profile is especially sensitive to climate, moisture, and soil conditions; and third wave coffees are varietals provenanced from single estates.

The Wall Street Journal recently reported on the booming online auctions for coffee than can cost as much as silver per ounce. The Guardian notes, however, that while this coffee is pricey, it does not mean that farmers are getting rich.

Today, the best coffees are grown on formerly undesirable high altitude lands where the country's majority Maya population live. They are grown by small farmers, who may never get rich but still see growing their own coffee as a chance for a better life.

In 2012, Korean buyers paid $500.50 a pound for a micro-lot of that year's mocha (an Arabica varietal) from the Guatemalan finca El Injerto. This entire lot was only 8 pounds, but the benchmark New York commodity price at the time was just over $170 per hundredweight, meaning that the El Injerto mocha sold for about 300 times the going rate.

I did not try this $500 coffee, but I have sampled a number of El Injerto's more reasonable (if still pricey) alternatives. They produce my favorite coffee by far, with a deep, almost smoky, base and highlights of dark berries and citrus. Tastes vary, but by almost any standard El Injerto holds its own with the very best.

Still, are these coffees worth $6.60 a cup wholesale? If it is what the market will bear, one could argue, then it seems that they must be. Objective quality (by established tasting standards and conventions) and market scarcity play an important role, but we cannot discount the symbolic values at play: the relative positioning of conspicuous consumption; the imagined, personal relationship with a producer; and underwriting it all, the cultural and market shift among the global affluent toward artisanal and singular products.

The first wave of coffee consumption lasted from the late nineteenth century up through the 1960s, marked by the spread of commodity coffee and the rise of Folgers, Maxwell House, Jacobs, Douwe Egberts, and all the other familiar grocery store brands.

The second wave started in the 1960s in the U.S. with Peet's in San Francisco and Zabar's in New York, and culminating in the spread of Starbucks to every nook and cranny of the country. Anthropologist William Roseberry describes this as a shift in coffee as the beverage of capitalism (coffee and sugar serving as great proletarian hunger killers, as Sidney Mintz has pointed out) to a beverage of postmodernity (an outlet for expressing identity and difference).

The Third Wave coffees take this to the next, artisanal infused, level, and is sold by online retailers such as Stumptown, Intelligentsia, and Blue Bottle and a growing number of high-end coffee shops that offer a variety of brewing methods.

What does this Third Wave mean for coffee farmers in places like Guatemala?

Throughout the twentieth century, coffee production in Guatemala was a highly concentrated industry composed of a small number of very large producers. These cafetaleros operated privately owned plantations and depended on temporary, migrant labour to deliver their high volume, low cost commodity product.

In the largely Maya highland communities where labour was recruited, working on coffee fincas was, and is, seen as employment of last resort because of the low wages and harsh conditions.

Today, we find a large number of former coffee labourers and subsistence farmers supporting their families by growing and selling their own coffee. The rapidly proliferating number of small producers — at least 50,000 new growers over the last 20 years, doubling the number of producers in Guatemala — has significantly altered the face of Guatemalan coffee. They started growing their own coffee as the market price rose, having learned production techniques while working on the large plantations.

These mostly Maya new producers are cultivating increasingly differentiated varieties of high quality coffee on their own small parcels of land using family labour and hiring day workers; a majority process and sell their coffee through a cooperative.

Day labourers report they prefer working for the neighbours, even if the pay is not any better. This production is sometimes sold directly to small and medium sized roasters around the world rather than disappearing in vast, undifferentiated lots of commodity coffee.

Growing coffee is tough, back-breaking work and these farmers mostly live in very modest circumstances, with limited resources and opportunities. They are acutely aware of the perils of dependency on fickle global markets; and while coffee prices have shot steadily up over the last decade, this follows a historic low in 2001.

Yet, as they describe it, coffee represents an opportunity in a context of few opportunities, an imperfect but valued means to realizing their desires for a better life; it is tied up with hopes, dreams, and desires that go beyond mere income.

These producers view the coffee market as a mechanism, a tool, a technology, a way of mobilizing available resources toward desired ends. These ends do not generally extend to the sorts of major structural changes needed for Guatemala's long-term and sustainable human development.

Rather, the coffee market is a means to achieve algo más (something more) given the actual context of limited opportunity and material resources.

The desires farmers in our sample expressed inform and motivate the ways new producers engage the coffee market toward their own ends — an instrumental moralization of the market at once similar and distant from the values ascribed by Northern consumers to their provenanced and fair trade gourmet coffee.

Growing coffee is tough, back-breaking work and these farmers mostly live in very modest circumstances, with limited resources and opportunities. 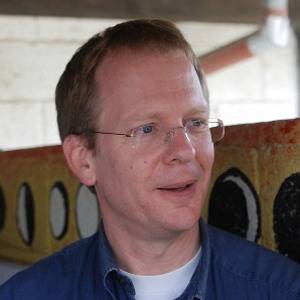 When not writing or teaching, Ted Fischer spends his time developing Maní+, a snack used to treat malnutrition in Guatemala

Ted is a cultural anthropologist who works in Guatemala and Germany, countries that actually share a lot of similarities beyond just beginning with "G."  The author of several books, he also leads a social business that makes fortified snack pastes to treat malnutrition in Guatemala, Maní+.

The Good Life: Aspiration, Dignity, and the Anthropology of Wellbeing, by Edward Fischer (2014, Stanford University Press)