The freedom to love

Politics, not self-fulfilment, dominates public discussion of love in India

Love isn't always considered to be something worth striving for. While Hollywood films take our quest for love for granted, and Valentine's Day takes hold around the world, there are still places where love is highly problematic.

In India and many other places around the world, love marriages have traditionally been forbidden. Instead, young people are expected to accept the spouse that their parents choose for them. Things are changing, but public discussion is dominated by politics, not considerations of self-fulfilment.

The rationale for arranged marriages rests on ideas of strict notions of sociality, but it is also considered to be practical: young people lack the experience and wisdom to choose their own partners for life. Parents are older and wiser, and know their children better than anyone, so they are best placed to make this important decision.

Over the past few decades, however, love marriages have become increasingly common in India. A whole genre of "love" films, television serials, and songs have encouraged the young to seek new forms of love. For some youth, "love" has become a way to defy family and community norms.

As a result, a new youth culture rides on love and its insignia of commercialized love (hearts on objects, a flood of cards, new fast food items and sites associated with dating, the paraphernalia of flowers, jewellery, clothes, and trinkets and trivia designed to express and facilitate love) and seeks outlets for expressing interpersonal desires and relationships.

The trend towards love marriages causes major frictions in Indian society. Parents protest that the new youth culture violates religious and caste prescribed marital choices. Love politics generate conflict over gender and intergenerational relations, between tradition and modernity, over individual and community preferences, between choice versus subscription, and over customary norms versus commoditized culture.

Parents' concerns are echoed in national politics. In India, a national movement commonly referred to as Hindutva seeks to retain, or reinstate, traditional practices and reverse the tide of foreign influence.

One political party that lends support to this movement is the India People's Party (BJP), one of the two major parties in India's political system. They and other fundamentalist forces have placed love in the centre-stage of their political agenda, targeting it as a violation of their ideals about how communities and relationships should operate.

The Hindutva brigade uses conflict over love to build its base and membership. In championing parental rights over youth culture, they claim to ‘safeguard’ family and community norms and values that uphold tradition and prescribed norms. They view love as a sign of degeneration, especially the freedom to express new forms of social relationships and choice of marital partners. By speaking out against love, they seek to build membership among disaffected parents.

This novel form of recruitment and intrusion into the fold of the family and community has found expression in the Hindutva brigade's labelling of several inter-caste and inter-religious (especially between Muslim men and Hindu girls) relationships as "love jihad." Their claim is that this "love jihad" is a conspiracy by Muslim fundamentalists, a network supported by international Muslim "terrorists," to convert Hindu girls into Muslims and to increase their population.

Where parents are unable to rein in these new social relationships among their young, they may endorse the ideas expressed by the Hindutva vigilantes. Some parents go so far as to make legal statements that their innocent daughters have been trapped by manipulative Muslim men and were the victims of the "love jihad." In doing so, they help to intensify a public construction of new forms of Muslim terrorism.

An interim report by the police department denies the existence of any formal and organized network that had deployed a scheme of "love jihad." Cases of runaway inter-religious couples that were sought to be placed within the "love jihad" framework are undermined by a lack of evidence.

But the rumours and hysteria surrounding love contribute to the objectives of the Hindutva brigade. Even district and local newspapers report cases of young couples who are missing as examples of "love jihad."

Runaway and prohibited "love" brings together inter-caste, inter-religious and inter-class relationships, but threatens the ideas and ideals of "pure" families and communities, and becomes the terrain on which growing communal tensions and hatred are promoted.

If caste and religious proscriptions prevent the free option to love, then terrorism as a private and public threat finds new sources to feed into pre-existing fears. "Love jihad" brings to the fore the circularity of hate.

Youth who dare to choose partners across caste, religion, and ethnicity are targeted by families and organizations, and Hindu fundamentalist organizations seek to discipline people who violate these rules.

The "love jihad" as rumour and disinformation has led to an intensification of public and private animosity and mistrust. Families deploy new curfews on their youth and stipulate who their children socialize with and how they dress. Members and supporters of the Hindutva brigade take it on themselves to provide surveillance and punishment.

That bus drivers in Mangalore, a coastal city with a large number of educational institutions and youth, curtail and punish what they see as "wrong and bad" company and sociality among youth, and enforce strict segregation among passengers, is just a singular evidence of this growing tendency.

Proscription against love is also found on park benches, erected by the BJP government, on which are inscribed strictures such as "vulgar display of love will attract punishment," "don’t embarrass others with displays of your love," and "indecent behaviour is prohibited."

As possibilities of open sociality and romance among youth increase, the absence of private spaces and the prohibition of such alliances enforces them to resort to such public display of their relationships. In this they become the targets of new forms of surveillance and vigilantism and their actions are constructed as forms of wrong "love."

These efforts to stamp out love do not go uncontested. In cities like Bangalore, pro-love groups hold parades on Valentine's Day to promote the right to love. Such instances are far from being forms of popular resistance to the growing fundamentalism and are only cases of the middle classes' narrow definition of democracy and freedom.

While paraders take the stage to rallying against draconian prohibition of "love," they overlook the multiple other ways in which democracy is being eroded at its base, such as in the areas of public participation, accountability, engagement and a broader concern for all religious minorities and the working classes.

The middle class and the range of civil society groups have largely turned a blind eye to the gross violations of democracy across the nation and against farmers, religious minorities and others. They face these issues with silence and indifference and largely limit their protests to love and contestation over its expressions and its associated freedom for youth.

India is a fragmented society with increasingly inequality. It faces no single issue as a common problem or challenge. Amid this growing fragmentation, civil society has proved unable to address the depletion of democratic processes and the erosion of even established forms of shared sociality.

In this climate, "love" has become both a symbolic and real source of contestation.

In the conflict over such issues, between Hindutva vigilantes and the protesters who seek to retain their right to love, are issues of what is meant by democracy and of the abilities of different classes to defend, question, or assert their democratic rights.

Love has become both a symbolic and real source of contestation. 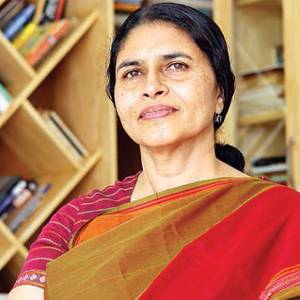 Author of "Harbingers of Rain: Culture and Drought in Bijapur, India"

Professor Aninhalli R. Vasavi is a Senior Fellow at the Nehru Memorial Museum and Library, New Delhi, She did her M.A. and M.Phil. in Sociology from the University of Delhi, and her Ph.D. in Social Anthropology from Michigan State University in 1993. She is the author of the book "Harbingers of Rain: Culture and Drought in Bijapur, India." She has worked at the Indian Institute of Management, Ahmedabad, and for 14 years at National Institute of Advanced Studies (NIAS), Bengaluru, including a year as Dean of Social Sciences.

The freedom to love

A longer version of this article was originally published on India Seminar. Version abridged by Erin B. Taylor for this publication.

Love in the time of Hindutva: Protesters against Hindu Mahasabha threats detained for hours, by Vijetha S.N. (15 February 2015, The Hindu)