Tall tales for a tall people

The Irish have a curious reputation to maintain. Everyone seems to like us, but we don't always have much faith in ourselves, especially now that we are having such a hard time in the global economic meltdown.

Writing about my own Irish culture is thus something of a balancing act. On one side of the scale, my country men and women expect to be able to recognise themselves in what I write. On the other side, I need to make Irish culture comprehensible to the outsider who may often have pleasant, though stereotyped, expectations that I am naturally too kind to undermine.

There is a 'myth' that we Irish are particularly adept at hyperbole. But it is not a myth: it is not hyperbole when it is true. Instead of relying solely of my native Irish charm, which gives all of us Irish the innate advantage of considerable powers of persuasion, to convince people that we actually do lead extraordinary lives, I set out to prove that we are more than average interesting.

Writing about the Irish, I was often tempted to change the endings of many lives to make them happier, nastier, more miserable or even more successful. But to my own disappointment I have stuck rigidly to the facts. I say this because I am sure that, like me, you will ask yourself, "Is this really true?" at certain points in the stories. Yes, it is all true. Our lives are tall!

Throughout history, Ireland has generated more interesting people than you can poke a Guinness at. This made my own tale-telling difficult, as I had to choose between them.

I ended up writing about: a selection of our less successful rebels because we have so many; some saints because we are famous for them, but I have also included sinners for moral balance; soldiers of both sexes because, while the Irish started very few wars in history, once a good conflict was underway anywhere involving anyone, we were happy to join in and take our chances; a variety of sporting heroes of a range of shapes and sizes because so many of us enjoy watching and playing sport; sailors and explorers because we live on an island and love the sea; and writers and their inspirations because we write almost as much as we talk.

I finish with our scientists and thinkers of varying degrees of rigour because, though we do not have an international reputation for our scientific achievements, we have had interesting experimenters and thoughts, and several people who were good at sums.

Some of the tallest tales I discovered revolve around people who are actually physically tall as well. 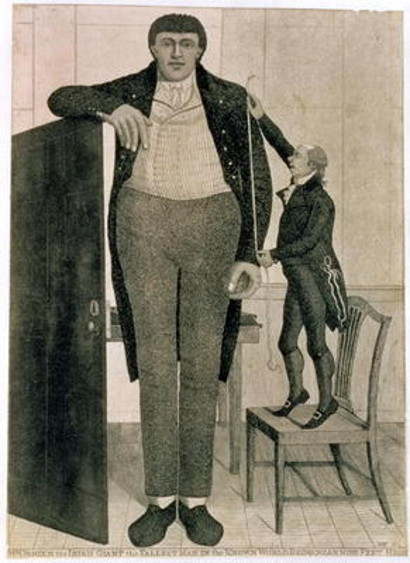 High King of Ireland, Brian Boru, had descendants that he could look up to because they were, literally, giants. One alleged descendant was Derryman, Charles Byrne (1761-1783). While alive, his height was estimated to be 8 feet. He was actually 8 feet, 4 inches when measured after his death. He formed a double act with the 3-foot Count Joseph Boruwlaski. Boruwlaski was obviously another descendant of the great king, only shorter.

Understandably he was upset, though you would wonder who would ask for change from a £700 note. He died in June of that year, apparently from excessive drinking brought on by "vexation at the loss of his savings." Fortunately, vexation is one of those historical conditions that don't affect us any more.

Byrne was terrified of the anatomists. He wisely requested that he be buried at sea. However, his wishes were ignored. When he died, surgeons surrounded his house in London like a peasant mob. After frantic bidding, his corpse was purchased by the famous anatomist Doctor John Hunter for either £500 or £800.

Byrne could have sold himself in advance to recoup his lost bank note and thereby have alleviated his vexation. He obviously had poor financial advisers. His skeleton is preserved in the museum of the College of Surgeons in London.

Being short can generate equally tall tales in the hands of the Irish.

One of my neighbours in Dublin was willing to relate her experiences with a cowboy builder after I plied her with three gin and tonics. Extraordinary age, combined with the alcohol, made her philosophical. She was having her attic converted as an extra bedroom for her great-grandchildren when they visited at the weekends. The attic ceiling would be low, she told me, but that was okay because her great-grandchildren were still small. By the time they would grow tall, they wouldn't visit or she would have 'kicked the bucket' anyway.

She hired someone who came highly recommended as a decent builder by her home help. She told me that she had been told the builder had 'done a great job on the attic' of the home help's sister's house. This is typical of the way recommendations make their way through the locality.

My neighbour has a new hip. During the build, the attic bedroom was accessible only by a steep ladder, so she was reluctant to climb up for regular checks on progress. However, after more than a week of worrying and listening to hammering from above, she climbed up very slowly, gingerly alighting onto what she considered to be a very flimsy-looking floor. The builder was crouched under the eaves doodling with something.

She asked him to confirm that the floor was sufficiently robust to hold her great-grandchildren. Indignant, the builder took up a position under the roofline where he had maximum headroom. Still crouching, he jumped up and down to demonstrate that the floor was, in his own words, "as solid as a rock, luv." He then promptly disappeared from view through the floor into the room below.

My neighbour made her way back down the ladder as quickly as she could to discover that the builder had bounced off the bed, which broke his fall, and now lay face down on the floor. When she checked to see if he was still alive, he informed her, from his horizontal viewing point, that her "skirting boards need replacing, luv."

There are many disadvantages to living on a damp green rock in the North West Atlantic. However, living there gives us our essential attribute: we grow naturally tall, perhaps from all the rain.

he jumped up and down to demonstrate that the floor was, in his own words, "as solid as a rock, luv." He then promptly disappeared from view through the floor into the room below 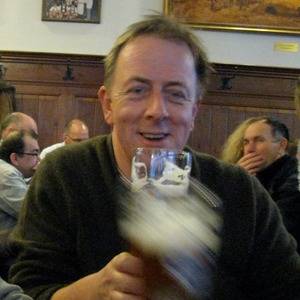 Everything you ever wanted to know about poets, madmen and scoundrels in Ireland.

David Slattery is a full-time writer and an Associate Fellow at the Graduate School of Creative Arts and Media at The National College of Art and Design in Dublin.

Tall tales for a tall people