I have been thinking a lot lately about money and grades. Not for the reasons you may think: that I want more and better of both (or to “give” tough grades). But because they share interesting qualities. My thinking is analytical rather than greedy.

Money and grades, I propose, are both supersigns.

Clearly, however we think of them, they are signs. Marx did a bang-up job in the nineteenth century analyzing money[1], and showing that it is a stand-in for things that have real value, things we can use, like shoes and fish. In and of itself, no matter what its form, money has no value other than for exchange, and that of course comes about because of agreement within society. When using money to make money, one arrives at capital. The primary goal of capital is to produce more money.

Grades, too, are signs. They signify achievement, in some specified realm. They are not quite as solid as money in the sense that there is less agreement about what they indicate. Is one student rewarded for promptness, obedience, and extroversion, and another for coasting on innate abilities? Is the grade measuring effort or achievement? Is the default beginning point perfection, from which one might fall, or is the default mediocrity, from which one might, with difficulty, rise? Are "good" grades limited? Pre-specified?

But grades and money share many characteristics, and one of the interesting ones is that they not only, however vaguely, are considered to "stand for" something else — in the classic semiotic notion of a sign. They also have other properties.

But exchange is not the only noteworthy property of money and grades.

Some properties are what the Peircian analysts [2] would call indexical. The signs index or are associated with certain people and by this association come to seem desirable. More money makes people more able to buy prestige goods and appear more like cultural idols, perhaps movie stars. Better grades makes people more like upper-middle-class folks.

And yet another set of properties is the conventionally symbolic:[3] We imbue these abstractions with power. They can become cultural shorthand; they can adorn clothing and accessories. They are assumed to bring with them vast understanding. We speak about them constantly and with reverence or fear. They have mystical and magical properties: popular books show that by visualizing money supplicants can bring it to them. At temples throughout the world, people pray for good grades and scores.

And finally, both money and grades enter the person's deepest psyche and relationships: people without money agonize, plot, obsess, lose sleep. Marriages are destroyed by the different notions the partners have about money. Bad grades can send children to doctors and other curers, and many parents punish or reward children for them. A raise in salary, even for people with adequate means, signifies admiration. A high grade for a high-achieving student is further validation of self-worth, and becomes addictive; anything less can produce terror.

Because of the multiple levels at which these two signs operate, all efforts to reduce their power are doomed. People who are "off the grid" and operate in a barter economy are regarded as threatening and antisocial. Professors or colleges that aim to reduce the tyranny of grades are seen — by students, administrators, the public — as shirking their roles. (University of California, Santa Cruz, after decades of using narrative evaluations rather than conventional grades, joined the mainstream in 2001[4], to the consternation of some.)[5]

Supersigns show the power of human beings to spin fantasies and then make them consequential. The invented becomes real. This is a wondrous capability of ours — we don't believe that chimps or dogs have it, for instance — but it can also lead to unnecessary baroque considerations. The "credit default swaps" that precipitated the 2008 economic crisis and current panics over grade inflation[6], along with gaming the system in affluent schools[7], are examples of signs run amok.

I don't expect to make a dent in the power of these supersigns precisely because they have such a firm purchase in so many realms and at so many levels. At least, though, I understand them a bit better, and I always have another fascinating set of human foibles to attend to.

I have been thinking a lot lately about money and grades. Not for the reasons you may think: that I want more and better of both (or to 'give' tough grades). But because they are both supersigns. 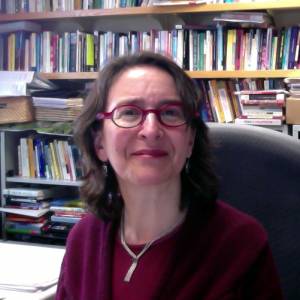 Professor of human universals and divergences

Susan Blum has been thinking about the nature of humankind, its universalities and divergences, for her whole life. As a scholar she is fascinated with the topics of Chinese identity and nationalism, truth and deception, naming practices, college plagiarism, and educational culture. She is the author of My Word! Plagiarism and College Culture and is finishing a book called "I Love Learning; I Hate School': An Anthropology of College."

[5] An article about USCS’s assessment system by Barbara Rogoff