Racism and the statue controversy

This article was co-written by Christopher Aris and Annie Robertson.

Statues are life-sized or larger carved or cast figures often considered artwork or cultural heritage. Recent events have forced us, however, to ask the question: should statues be considered 'history'?

This question can no longer be avoided since statues have been removed (via various methods) following the spread of the #BlackLivesMatter protests, calling for racial equality and the end of institutional mistreatment of black communities and people.

While many have argued that the call to remove statues of prominent figures associated with the African slave trade is an important step forward, others have argued that the removal of statues is a loss that hides, or even destroys, human history. Given the strong cultural ties between statues and history, conversations on this statue controversy, what they represent, and their role in perpetuating racism are ongoing.

From the perspective of anthropology and archaeology (the studies of the human species and their material past) it is difficult to define statues as history. They can be beautiful and powerful tools for education and when their inspiration is drawn from a cultural event, they can be the focus of research. From this perspective, statues and other artistic remains such as carvings and engravings are less our history and more our archaeology.

Meanwhile, from a psychological point of view, statues can provide insight into the beliefs and values held by a society at the time a statue was erected. Statues typically showcase unavoidable biases because the information displayed alongside is usually positive and lacks 'the other side of the story'.

The intent of this information is to skew public opinion. Those who erect statues want to focus on the positive aspects of individuals, especially when they are chosen as the muse of public displays of history and culture.

It is important to note, however, that the loss or removal of a statue has no impact on the archive of historical knowledge. Students do not flock to study at halls full of shelved statues. The reference lists of academic literature are not lined with artistic depictions. And, as archaeologist Claire Baxter wrote in relation to colonialist statues:

"We don't need a statue to teach the history of colonialism…The fact is that statues are teaching us very little about history".

While this could be seen as an over-simplification, it is fair to argue that this point represents an important step towards a nuanced discussion on the cultural thinking and responses to recent events regarding statues.

It is especially important that we understand why statues are not purely history from a cultural perspective. Statues may represent snapshots of historical happenings and depictions of people, but at a deeper level, they represent how their culture of origin 'chooses' to interpret and present them. Statues can also be described as monuments for celebrating cultural events or people, which in some cases can be used to educate and influence public behaviour and opinion.

When we give things such cultural power, we must remain aware of the context of their message, and how these contexts can change over time. This is particularly important in order to avoid the romanticising of cruel events and people, which perpetuates the systematic racism which exists in the modern world.

The recent global Black lives Matter protests, and the responses of multiple governments, shows how public opinion and beliefs are ever changing and, especially in the case of the #BLM movement, promote the normalisation of equality.

If societal beliefs can change and adapt in this way, why should our cultural monuments remain as they are?

To answer this question, we must ask why the removal of statues, legally or otherwise, may upset people. Only by doing this can we move forward towards tackling racism, becoming anti-racist, and normalising equality.

One of the most popular examples of the statue controversy is the removal of the statue of Edward Colston from the city of Bristol in the UK. While parts of history describe Colston as a merchant philanthropist and praise-worthy politician, he was also complicit in the Atlantic slave trade. He acted as both a member and, for a short while, deputy governor of the Royal African Company, the organisation that held a monopoly on the English slave trade of black African people.

While philanthropy is to be commended, racism and slave trading are rightly seen as far less commendable traits. It is impossible to present the acts of Edward Colston via a statue without also implicitly supporting his acts of horrific racism and human trafficking. This is an uncomfortable truth, but one that must be acknowledged by those who were upset when the statue of Colston was removed.

Of course, this issue is not unique to the Colston statue, but also relates to recent events surrounding the statue of Winston Churchill in London and Robert Baden-Powell in Poole. The issue also exists internationally. In particular, very similar issues are ongoing in the United States of America surrounding statues emulating the Confederacy, its civil war generals, and their association to slavery in the USA.

Similar debates have also surrounded the removal of a statue of Mahatma Gandhi from the grounds of the University of Ghana, following the more public surfacing of his discriminatory views of native South African communities.

The legality of how the Colston statue was removed is not for us to comment on, and we are certainly not advocating for vandalism or for all problematic statues to be taken down and thrown into nearby harbours.

However, as students of anthropology, archaeology, and psychology, our expertise allows us to talk about the ethical, historical, and cultural implications. It is entirely fair to say that statues, whether problematic or not, can be a valuable tool for learning from past societal mistakes.

In order to do this, however, statues must be viewed from within their unique contexts, whether these are more unknown in the case of Colston, or perhaps more obvious in the case of Confederate generals.

The Colston statue, for instance, was placed in central Bristol because, at the time, people wanted to celebrate the city's history. As a result, when someone wants to retain the statue to celebrate the economic accomplishments of Colston, they inherently (and hopefully unintentionally) celebrate his involvement in the slave trade. This is an uncomfortable truth that must be accepted. In order to address this truth and to normalise equality, the removal of statues, such as Colston's, from public places will often be necessary.

It should be noted that the removal of statues from the public eye does not mean to remove them entirely. In the case of the statue of Edward Colston, after being recovered from the harbour, the statue and its full story are being preserved and placed in a museum. Here, the statue can act as an excellent tool in an environment which aims to educate and broaden peoples understanding, while reframing the wider context of celebrating Colston's racist acts.

Throughout all this potentially difficult discussion it must be remembered that statues are not history. The removal of statues does not erase the museums where they can be stored and displayed. Flocks of students will continue to fill libraries to bursting point, and published articles will forever reference each other.

We can continue to learn from and retain history, continue to be educated on the past, and continue to celebrate people and places through statues, all without the need to keep racist individuals and ideals present in the public eye. If they are to be kept public, information about the subject's misdeeds against equality must be made available as readily as that on their successes – especially in cases where these deeds may remain conscientious against modern morals and ideals (see, for example, the Winston Churchill statue debate).

Discussing racism is a progressive step forwards but acting on it and directly moving towards anti-racism is better and far more urgent. The discussion on the role of statues and their association with systematic racism should not end as just that, a discussion. Overall, we must continue to learn and consider a statue's context, be willing as a society to seek the normalisation of equality, and also be willing to remove statues as society progresses in a positive direction away from perpetuating institutional and societal racism.

In the 'Further Reading' box we have listed a number of sources for people of all educational backgrounds to further educate themselves, and a list of organisations that require support in order to continue their efforts to support BIPOC (Black, Indigenous, People of Colour) and BAME (Black, Asian, Minority Ethnic) groups.

Statues may represent snapshots of historical happenings and depictions of people, but at a deeper level, they represent how their culture of origin 'chooses' to interpret and present them. 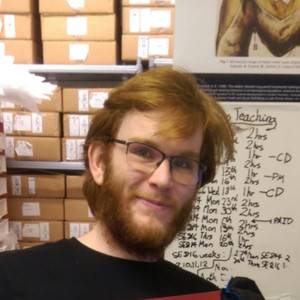 Teaching Associate in Anatomy and Osteology at the University of Sheffield, finishing a PhD

Teaching Associate in Anatomy and Osteology at the University of Sheffield, finishing a PhD.

Racism and the statue controversy