I'm an anthropologist whose research examines the use of prison inmates to fight wildfires in Arizona, and am drawn to the absolutely confounding paradox of their being allowed to labour alongside non-inmate fire-fighters while in prison, but never being allowed to do so upon their release, since Arizona state laws prevent individuals with felonies from becoming public servants.

The collapsing of the moral schism between hero and criminal is what drew me to my dissertation topic, and so, when the press picked up the story of the "hot felon" Jeremy Meeks' mug shot going viral on the Internet, I couldn't help noticing that this was another example of that paradox.

That is, how do we as a society reconcile what it means to be a criminal and what it means to be its moral opposite? What does it mean to be a felon, with all of its subsequent social cauterization, while simultaneously being our collective pin-up guy?

As the social media machine picked up steam, I wanted to hear a discussion about these questions. Unfortunately, the meta-commentary surrounding Meeks missed the point in two major ways.

Meeks was arrested last month in Stockton, California, as part of a joint-agency gang sweep. Meeks and two others were stopped driving by police, and according to the San Joaquin County District Attorney,

"A search of the passenger compartment yielded a 9mm round of ammunition and a small amount of what is believed to be marijuana… A search of the trunk located an unregistered and loaded… 45 caliber semiautomatic handgun along with two extended magazines."

All three were arrested and booked. As part of their agency's ongoing social media outreach, the Stockton Police Department posted the mug shots of Meeks and his fellow passengers on the agency's Facebook page. Within days, Meeks' mug shot went viral, as his good looks garnered attention from around the globe.

This story has two angles: that of Meeks himself, and that of the press that surrounded his viral fame. This two-part article is concerned with the latter story—what didn't we learn from Meeks's 15 seconds of fame? In this first article, I'll discuss how this story has perpetuated the categorization and cauterization of the 'criminal' as a morally unacceptable, reified Other.

In a second article (coming soon), I'll explore how we have missed the connection between this particular gendered criminal body and other recent discussions on masculinity and criminality (namely, the recent shooting rampage of Elliot Rodger and the subsequent #notallmen #yesallwomen social media phenomenon).

My objective in writing this is to add some anthropology to the mix. In the weeks since this story became a story, I have seen some people give it the psychology treatment, with articles like "Why Women Still Love Bad Boys" that discuss the socio-psychological reasons that 'bad' men titillate female sensibilities. I've also seen a couple (pretty lame, to be honest) articles that read this situation as a stumbling block for feminists, a momentary lapse in our agenda to fawn over a man.

I understand that these two angles were the obvious reactionary analyses, and moreover, I understand that most people thought we shouldn't be analyzing this story at all. But before we return to forgetting about Jeremy Meeks, I want to add some broader, more philosophical weight to this story. And, I want to make a case for why we indeed should have taken a moment to think of Meeks, of categorization and criminality, and the consequences we find therein.

Jeremy Meeks is Not a Handsome Felon

Nor is he a 'smooth criminal,' 'hottie thug,' or 'blue-eyed gangsta.' In case you want to stop reading soon, let me drive something home right up front. To call someone a felon or a criminal is to engage in the process of social categorization, or rather, social cauterization. It is an act of moral branding. In my studies, based on the work of William Simmons, I have come to use the term cauterization rather than categorization, because it implies inflicting embodied, felt consequences on that person who you so name.

Ask almost any person who has gotten released from prison how it feels to be called a felon, as if that is written on their skin, on their very being. Ask them what consequences it has had, and continues to have in perpetuity. This broad-stroke language is pervasive and it is, linguistically speaking, easier. But it is not OK.

To be clear, I am not a Meeks apologist, nor do I expect people to read this and change their opinion on if he should be sentenced to time in prison. The argument about gun laws and crimes more greatly impacting people of color, or gang activity being a broader socioeconomic issue, is for another article.

When I discuss the notion of cauterization and prison, the most common response I get is, "But there are people who deserve to be in prison," or, "So you want to be a friend to them?" All I'll say here is that there is a difference between recognizing crime and the people who commit them, and understanding the weight of the category 'criminal.'

Before writing this, I read articles and watched news stories about Meeks. One, a clip from the nightly Sacramento news broadcast, will suffice to analyze for the purposes of my argument. The reporter pulled out comments from Meeks' photo on the Stockton Police Facebook page. Two were, "If this guy broke into my house, I'd make him forget why he broke in within 30 seconds lolololol," and, "Criminals aren't sexy… Real men work and ladies don't fawn over criminal trash."

After reviewing these comments, the reporter somehow landed an exclusive interview with Meeks himself. He asked Meeks, from across a Plexiglas pane that separates all charged felons from the outside world, if he knew about his rising fame, to which Meeks responded humbly. Then the reporter turned his attention to the viewers. He stated, "For those of you [talking about this online], we wag the finger of shame at you. We never want to put these people on a pedestal."

This newscast succinctly encapsulates the narrative of the Meeks story thus far: 1) note that the guy is hot, preferably by using generic crime puns, 2) remind people that this guy isn't hot because he's a criminal, and 3) admonish us for even talking about it because even talking about a felon somehow incriminates ourselves.

So what's wrong with this picture? I don't think that it's stating Jeremy Meeks is hot. What's wrong is that we have missed the opportunity to have a conversation about the effects of cauterizing criminals on a moral and societal level. We could put any word in front of criminal or felon – hot, blue-eyed, smooth, bangin'. Regardless of the qualifier, we have still, in that moment, undeniably and categorically separated ourselves from them.

Some may ask at this point: But isn't that what people in prison get for doing something bad? I understand the logic of that question, but we have to think critically about why and how — historically, socially, ontologically – people in prison became categorically bad. It is important to remember that this was not always the case: Foucault's compelling thesis on discipline and biopower traces the long and steady process of transforming criminality from individual acts of wrongdoing to the wholesale classification and discipline of populations for the gain of those in power.

Moreover, the act of social cauterization and the branding of criminality is a sort of moral slippery slope. If Jeremy Meeks is 'criminal trash,' does that mean everyone who has been in prison is too? Given that one out of every hundred US citizens are in prison, does your cousin, uncle, sister-in-law, or friend from high school get thrown in the refuse pile, without question? If not, how (and why) do we get to decide which crime (and criminal) is forgivable, and which is not?

I know that there's a broader debate about the power of claiming one's own identity here (thinking about how people in AA or NA ritually state they're addicts is a good example, or how people who have cancer claim the identity of survivor). But I would argue that the classification of 'felon' or 'criminal' doesn't fall under this same symbolic/discursive umbrella, because it does not hold the same moral potential of redemption or perseverance.

When a person who has been in prison goes to get food stamps, or a job, or an apartment, there is little power in proudly claiming, "I am Felon, here me roar!" It is almost always used as a way to exclude, to become gazed upon as a moral outsider. Think of this, and then re-read the Facebooker's comment claiming Meeks was not a 'real man.' Re-read the news reporter's chiding that we should not valorize 'these people.'

I would say that we've done an exceptional job, in the short amount of time since we learned of Meeks, to become entrenched in our exclusionary and classificatory rhetoric towards people in prison. Like I mentioned earlier, it is certainly easier for the editor of an online news outlet to type "Hot Felon" as opposed to "Person charged with crime is super hot." It doesn't flow as nicely, to be sure.

But what I would ask is: what are the real, bodily, daily consequences of this linguistic laziness? Should we wag the finger of shame at ourselves for speaking of Meeks as something beyond criminal trash, or for being complicit in upholding a classificatory regime?

In Part Two, Lindsey will discuss how Meeks' masculinity simultaneously helps and hurts the categorization of his and other criminal bodies.

We could put any word in front of criminal or felon—hot, blue-eyed, smooth, bangin'. Regardless of the qualifier, we have still, in that moment, undeniably and categorically separated ourselves from them. 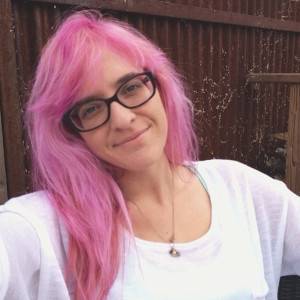 Compliment strangers, eat lunch with homeless people, and if you have boobs, love them dearly

Lindsey is a current PhD Student in sociocultural anthropology at the University of Arizona. Her dissertation topic will be on the phenomenon of inmate wildfire fighting in northern Arizona. Lindsey is a native Tucsonan, is married to a welder, and has a really goofy dog named Meatball.

Lindsey's personal blog on her work and research.