After seventeen consecutive attempts by her smartphone-wielding boyfriend, Sharon thinks she finally has the perfect shot: no shadows ruining the natural lighting; no flyaway baby hair from unexpected gusts of wind; the illusion of a longer torso and limbs from clever camera angling.

The 20-year-old blogger frantically flicks through her library of photo editing phone apps for the perfect photo filter. The entire world is at a standstill, as she pauses in the sun, digitally manipulating her latest masterpiece for fifteen minutes with a patient boyfriend who is all too familiar with this routine.

Just a final step to go: poring over prospective hashtags. Sharon confirms the spelling of "Brighton Beach" with a quick search on Google, and proceeds to spam her photo with a plethora of calculated hashtags. #brightonbeach and #melbourne would undoubtedly direct foreign viewers and traffic to the Singaporean blogger's Instagram feed. Plus, holidays outside Asia are exotic, you know? Perhaps the #vintage stream might attract the attention of a few hipsters.

Muscle memory takes over as she ends off with the usual local tags #ootd, #oo7d, #igsg that reaches out to amateur fashionistas. And now, she waits.

The first few likes start streaming in. As do the usual compliments from faceless others on the interwebs. Within the first hour, the picture has garnered 7,000 likes. Mission accomplished.

So, Sharon may sound a tad dramatic, but don't we all (not so) secretly snap serial "selfies" and post them online all the time? Crafting the perfect photo is no easy feat, and even less so for Sharon who has tens of thousands of Instagram followers globally who are constantly hungry for the social media star's updates.

How often do you post on social media, and just how calculated are your posts? Do you ever think about the aesthetic value of your photographs, and the hashtags you use?

Commercial lifestyle bloggers in Singapore deliberate over such decisions on a daily basis for good reason ­many of them are earning four figure sums monthly for their social media posts. One blogger even reportedly received close to a million dollars in sponsorship and endorsements within a year by capitalizing on her social media prowess.

Let's learn from the experts and understand some uses of hashtags that help capture the attention of internet users.

For many bloggers, hashtags are used to mark product branding. The corporations who engage bloggers for advertorials usually decide an "official" hashtag for bloggers to use in their posts. A unique hashtag aggregates disparate posts published by multiple bloggers into a single searchable stream, thus allowing the public to follow a campaign easily. A popular hashtag appropriated by Singaporean telecom company, Starhub, is the catchy "#AddMomOnFacebook" that was adopted by hundreds of users.

Bloggers also use hashtags to bond with readers. Some bloggers do "shout outs" by requesting for readers to publicise their social media accounts in exchange for being mentioned by the blogger in a post.

"#stephanieissexy! Repost and ten lucky followers will be mentioned!"

"Hey guys! Hashtag #huiminisfollowing! The five top posters will be followed back!"

A few bloggers create hashtags for for persona branding, and request for readers to hashtag their names on posts that they wish to share with them.

"Anything you want me to see? Hashtag #limweiwei okay!"

These publicity drives usually give bloggers a spike in their readership and followers in a short span of time.

"Upload please!" and "Tag me can?" are common chimes when bloggers take group photographs and remind each other to "tag" everyone in a photo. This allows photographs taken by others to show up or be "seen" on the individual blogger's social media accounts as a means to publicly document their presence among fellow bloggers at various events. As a visual variation of a narration of the self, being "seen" crafts a blogger's digital personhood, allowing them to constitute their membership in a community and draw interpersonal relationships in these networks thus elevating their social status.

It is also crucial to remain relevant and connected to the "scene," that is, the highlight and bustle of popular activity such as grand openings, parties, concerts, and other exclusive events. Event hashtags such as "#gcweekends" and "#Nuffnangis6″ indicate the blogger's presence at these functions with fellow bloggers, in a bid to show readers that one is "at the right parties," "mixing with the right people."

In order to effectively enact one's presence at a "scene," it is important to hashtag with immediacy throughout an event as a live record of a blogger's actions and thought trails. This is especially so because most event hashtags become out-of-date very quickly after the occasion ends and the buzz dies down. As a mark of "Internet street cred" or virtual world reputation, tagging and hashtagging situates bloggers in the scene, places them in the ranks of popular others and adds to their social currency.

Do you use hashtags in your social media posts? Which ones are your favourite and why do you use them? The next time you click "publish," remember 20-year-old Sharon and try a few of her savvy hashtagging practices yourself. Who knows, you just might find yourself a few fans on cyberspace!

As a mark of "Internet street cred" or virtual world reputation, tagging and hashtagging situates bloggers in the scene, places them in the ranks of popular others and adds to their social currency. 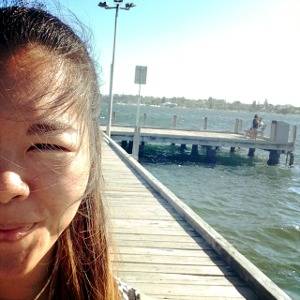 Crystal is PopAnth's Section Editor for Contemporary Culture. She an anthropologist and ethnographer who researches vernacular Internet culture and mixed heritage in contemporary societies. Crystal is an Affiliated Researcher with the Media Management and Transformation Center at Jönköping University. Reach her at wishcrys.com.

What is a lifestyle blogger, anyway? Here are a couple of examples: Naomi Neo and Marx Mae.

Interested in the global import of social media? UCL researchers blog about what they’re finding out