Titles of articles such as "Men eat meat, women eat chocolate: How food gets gendered" and "Here's Why Salads Feel Feminine and Nachos Feel Manly" offer the impression that the way we think about food and gender in the Western world is innately intertwined.

Some have argued this dichotomy of man / woman and hearty food / lighter fare comes from our evolution, while others believe it has something to do with our biology.

In truth: it's entirely constructed.

Take, for example, this run-of-the-mill American commercial for Pizza Hut, one of the myriad pizza delivery chains we have in the United States. The commercial itself featured a 'traditional' American family—a husband, a wife, two children (a boy and a girl). The husband walks into the room, holding a box of pizza, excitedly claiming:

"I can get a meat lover's, and they can get all the fresh veggies they want. No more compromise."

During the short 15-second commercial, the husband's use of language and food ascribes gender roles to him and his family. In the husband's case, he places himself within the existing media trope of the Meat Eating Man—a common and overused theme that associates meat consumption with machismo and virility.

He uses the prop of food, in this case, the meat-filled pizza, to distance himself from his family's femininity. In ordering a separate pizza, filled with carnivorous toppings, he is affirming (to himself and to the viewers) that it is both acceptable for men to eat meat, and more importantly, that the inverse is also true: "real" men cannot consume vegetables, for fear of damaging their masculinity.

Similar ascriptions befall the husband's wife and children, he effectively confines them to the "feminine" role through purchasing them a solely vegetarian pizza, in which only the wife and children partake.

The presentation of the meat-filled pizza does just as much to reaffirm the husband's masculinity as it does to reaffirm the idea that true femininity is found in "delicate" and "healthful" foods.

The visual pairing of the wife with foods that are considered healthy (images of chopped mushrooms, peppers, and onions cross the screen when he mentions his family) reinforces gender stereotypes by suggesting that a woman's physical appearance is of utmost importance in society.

Even in consuming pizza, she must choose the healthful option, for fear of damaging the believed source of her femininity.

In ordering separate pizzas with toppings that hold such a gendered history in media, the 15-second commercial continues to feed audiences the same false idea: men must act one way, and women another, and they do so through certain foods.

A simple way to collapse this ridiculous gender-dichotomy is for the husband to order one large pizza with vegetables and meat. (This would, of course, render the financial deal he scored meaningless.)

How do we know this commercial is a construction of gender roles and expectations around food, rather than a reflection of lived reality? Marketing. Marketing is responsible for producing the one sided story food companies wants consumers to hear: advertisers exploit these gender dynamics to make an easy play at our minds, our stomachs, and our wallets.

Another way we know this commercial is constructed through ingenious marketing: it is unique to North America.

While the United States holds great sway in advertising, a great many other cultures and countries exist in this wide world, and they do not all practice the same line of thought as Americans.

An extreme example of the "swapped" relationships between gender and food comes from anthropologist Barry Hewlett. In studying the Central African tribe, the Aka Pygmy, he found that it is the men who stay home and breastfeed the children, while the women of the tribe go out and hunt for food.

Fathers in this tribe will cook the food while the mothers will plan the location of the next camp site. What is important to point out about the Aka Pygmy is that it is less sensational that men take over the housework, and more sensational that they do not face stigma when asked to do so: the role of "caregiver" is a gender neutral role in this society.

To explain why these constructions surrounding food and gender are built up in culture, it is necessary to step back and look at the words we use to speak about it. Language—both visual and written—shapes how we interact with society.

In fact, language produces society. Recent studies have examined how what we say shapes what we think and how we process and interact with others. Scientists have found that what we say does indeed change what we think.

One language tool that is already disrupting this food and gender construction is the web-comic Cyanide and Happiness with a comic fittingly entitled Gender Rolls. The title is a smart play on words that highlights the existence of gender norms using the medium of food. The comic highlights the underlying truth about gender norms: they are ultimately made up, and when we "flip" the roles, this arbitrariness is exposed.

The comic's social commentary draws its source and wit from its use of homophones—words that are pronounced the same but have different meanings and spellings. The introduction to the homophone joke is made in the second panel when the roll-holding character says:

"My wife baked them … they're traditional gender rolls"

However, the homophone (and ultimately the social commentary addressed) is only realized in the fourth panel:

"yeah, she should leave the cooking to me."

The character is addressing the fact that traditional gender roles were what led to his wife baking the rolls to begin with. In doing so, he highlights the absurdity of gender norms: any person can perform any kind of action.

Your gender neither dictates what role you should perform, nor endows you with the ability to bake delicious rolls.

Cyanide and Happiness's comic is a commentary on the assumptions we make about gender, how changing our language can change the roles we ascribe to people around food. While it was published eons ago in Internet time (2012), in the age of interdisciplinary studies, it can help bridge the gap between the academic anthropologist and the practical teacher.

It is not far-fetched to search for commentary on gender roles in pizza commercials and in web-comics: since we believe the language and visuals of advertisements to be harmless, we in turn believe we are immune to their message.

And so the mass use of food to sell ideas continues. But language, both verbal and visual, is the most powerful tool we have to communicate what is accepted in our culture.

Language also has the power to change what we find acceptable: including the preposterousness of ascribed gender "rolls" roles.

How do we know this commercial is a construction of gender roles and expectations around food, rather than a reflection of lived reality? Marketing. 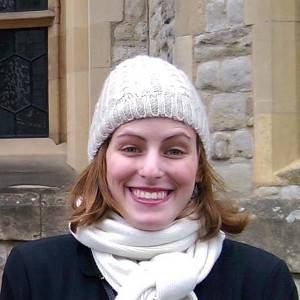 Molly hails from the Midwestern U.S. where the land is flat but our pizza is superior. She completed a Masters degree from University College London and published a paper on ethnographic narrative theory in SUNY Buffalo’s Anthropology journal (of which she is very proud). She fenced competitively in college. Currently she is employed as a Researcher with ABIS.

One of my favorite ways to digest really difficult concepts: 8 bit Philosophy explains: Is Gender Real?, which explains the concept of Judith Butler's "gender as performative"

Read a story about moving away from gender based marketing in children, regarding Target's decision to swap out gendered labels in their toy department