The Archaeology of Woodstock 1969

The photographs…resembled the aftereffect of an attack of deadly gas on a densely populated city. It looked like a civilization in suspended animation…the spectacle of 175,000 apparently lifeless bodies draped across the wide open spaces (Bob Spitz, Barefoot in Babylon: The Creation of the Woodstock Music Festival, 1969)

There was a sort of a stillness and it really looked like those old photos you see of old Civil War battlefields, where you see a dead horse and these mounds of things that have been left (Joel Makower, Woodstock: The Oral History)

…all this stuff lying around just like dead bodies. You've seen those old pictures of battlefields on glass plates, of bloated horse bodies, cannonballs, dead soldiers lying in the field. That's what it looked like (Michael Lang, The Road to Woodstock)

…there was a lot of garbage…like the land had been decayed, like the surface of the moon almost… crevices and craters, places where bodies had been (Joel Makower, Woodstock: The Oral History)

Taken at face value, these quotes sound like eyewitness accounts of some terrifying historic battle, somewhere where thousands of combatants came together and only hundreds left. Andersonville. Battle of the Bulge. Gallipoli. But each of these anecdotes describes the Aquarian Exposition of August 1969 in Bethel, NY, better known as Woodstock.

Much of what we think we know as Woodstock comes from popularly conceived notions that make up our collective memory of the event. These commonly held beliefs are connected with an idealized suite of material culture that we associate with the festival and 1960s counter-culture—bell bottoms, peace signs, and love beads.

But an archaeological inquiry—examining evidence from oral histories, photographs, newspaper accounts, and actual artifacts—adds to the history and archaeology of Woodstock and provides a deeper interpretation of the event beyond just great music, mud, and free love.

Few people realize that the four-day Woodstock festival wasn't held in its namesake town, but perhaps even fewer consider the grounds an archaeological site. In fact, the short duration of the event, the astonishing density of people over a very limited space, and the contentious political relationships surrounding the event are more characteristic of a battlefield site than any other archaeological context.

About ten years ago, the Bethel Woods Performing Arts Center began construction of an outdoor music venue at Woodstock. The project design took advantage of the natural amphitheater-like contours common to the Catskills Mountains and designed a concert ground on the hillside opposite the main stage area for the 1969 festival. Before construction, state and federal law required an archaeological investigation of the site to ensure that no historic resources would be affected by the new project.

The study consisted of an examination of historical literature and maps, as well as a systematic survey of the entire property. Archaeologists excavated small test pits, about 16 inches in diameter set about 50 feet apart, to identify any prehistoric or historic artefacts still present in the grassy fields.

Surprisingly, despite the photographic and documentary evidence of "endless dead, wet blankets" and "six inches of mud and trash" at the site, archaeologists found very few artefacts from the modern period in hundreds of test pits.

The organizers at Woodstock had prepared for trash, but eventually became overwhelmed by the tsunami of refuse and filth generated by the hundreds of thousands of revellers. They contracted with several hauling companies and leased two new compactors to reduce the number of trips needed to remove trash from the site. They also rented phalanxes of portable toilets and installed temporary water lines to address other sanitation needs.

But torrential rains, clogged roadways, and crowded conditions thwarted most of their plans. Water lines broke underfoot. Cooling units malfunctioned, leading to the spoilage of entire trailers full of food. With hundreds of cars parked haphazardly on roads surrounding the farm, hauling trucks could not leave the site to unload the garbage.

Eventually, the organizers used a backhoe to excavate an 80-ft long trench to empty the spoiled contents of the trailers as well as the overflowing toilets. As concerns about fan safety and sanitation mounted, organizers continued to monitor the developing situation in the state capital at Albany, where the governor considered sending in the National Guard to quell what he was certain to be a riot.

But the organizers had the goodwill of the festival attendees on their side. After the concert, many people stayed behind to clean up the rubbish. Bulldozers pushed trash into towering piles. Some salvageable materials were stockpiled for charity deliveries. Cars were towed from the surrounding roads.

The site of Woodstock eventually returned to its former existence as a bucolic cow pasture, although a later journalist stated that parts of the stage still stood in the field a year later. The clean-up effort was so effective that the subsequent archaeological study found very few artefacts clearly associated with Woodstock. Even avocational metal detectors warn in online forums that later reunions and two centuries of farm debris make Woodstock a difficult site for collectors seeking good provenance.

While the absence of a great Woodstock hoard may seem disappointing, this just adds to the historic event's contradictory allure. Historic photographs and accounts suggest a Pompeiian layer of trash lying just under the surface, but the archaeological study and a closer reading of documents challenged that theory.

The apocalyptic descriptions of the festival grounds serve the same purpose. These quotes came from not just any eyewitnesses, but organizers and journalists who had a behind-the-scenes experience of the festival not commonly included in the popular narrative. They were reflecting on a stressful situation devolving into chaos, including staggering amounts of trash generated by the press of attendees, tens or hundreds of thousands more than anyone expected.

Historical archaeology benefits from a broader range of evidence than the typical archaeological investigation by examining artefacts and documentation, another type of material culture. People typically associate archaeology with the study of artefacts from the ancient past, but what the discipline really boils down to is the study of people and their stuff.

This "stuff" includes artefacts from the distant past and from our daily lives, providing a medium for human interaction. Artefacts are things made, manipulated, or modified by people, and include everything from buttons to farm fields, bottles to written language. They are the things you curate to tell other people something about yourself, but they can also be the walls you build to keep other people out and create space.

At Woodstock, the trash became a sort of monolithic artefact, no longer individual discarded items. The oral histories collected in the following decades suggest that the trash was a key building block in the construction of the event's experience and memories, especially for the concert organizers. This curious framework led to some memories of the event that largely contradict the accepted narrative.

As the quotes show, people behind the scenes and responsible for the well-being of the young audience thought the place resembled a war zone, while the intention of the event was clearly the opposite. Even though the archaeological field study uncovered very few pieces from August 1969, recorded memories of the trash prove it was an essential part of the Woodstock material experience.

So what exactly is Woodstock, the archaeological site? This is a question of both content and scale. Volunteers and paid staff removed trash from the festival grounds just as quickly as it piled up, not unlike a battlefield, where bodies and salvageable materials were collected and removed during the days after a battle that may have lasted only an hour.

Agricultural activities both before and after the festival and the semi-regular anniversary gatherings cloud the archaeological data, not unlike some battlefields that took place on open, easily traversable terrain and saw later re-enactments.

Regarding the question of scale, every archaeological site has its limits or boundaries, but where do we draw the line at Woodstock? Yasgur's field is neatly bounded by fences and roads, which delineate the main concert grounds.

But the elements that contributed to Woodstock's iconic history spread far beyond that field and suggest a broader archaeological footprint. People could hear Hendrix's guitar, Joplin's wail, and Moon's thundering bass drum for miles around, echoing off the Catskills. Abandoned cars lay on road shoulders all the way to the highway. Concert-goers slept in cemeteries, cleaned out the stock in local stores, and bathed in lakes and ponds.

Battlegrounds, as well, have greater scope than just the place where the battle occurred, including temporary settlements, key objectives, and avenues of approach and retreat. And the sound of the artillery, the soldiers raiding farm fields and larders, and sprawling, impromptu encampments on the march strengthen this parallel with Woodstock.

We may think we know all about Woodstock from the movie and photographs, but seeing the event through a historic archaeological framework reveals interesting contradictions between the popular memory and the actual experience by building a more nuanced, contextualized narrative. In addition to the memories of concert organizers and other participants, the physical characteristics of the site resemble those of a battlefield as well.

When considering Woodstock's archaeological footprint and the political and economic anxiety behind the scenes, perhaps a battlefield context is the best way to analyse this unique archaeological event. While this clearly does not fit the intentions of the audience, organizers, or performers, it best addresses the unique formation processes and characteristics that come with this sort of historical event.

At Woodstock, trash that once seemed so monolithic, so epic, became something sublime and ephemeral in the end. Some organizers left the site after the festival by helicopter to answer to their financial backers in New York City. They were nervous, especially considering the number of checks they floated based on uncounted ticket proceeds.

Looking out of the window on their way over the site, they noticed that volunteers had created a giant peace sign made out of trash collected from the field, a final optimistic expression through the use of the same rubbish that prompted comparisons with Andersonville and the Battle of the Bulge.

This alternate narrative of Woodstock is a reminder that archaeology and history are sometimes less about uncovering small things forgotten, and more about understanding the big things that popular memory has obscured. 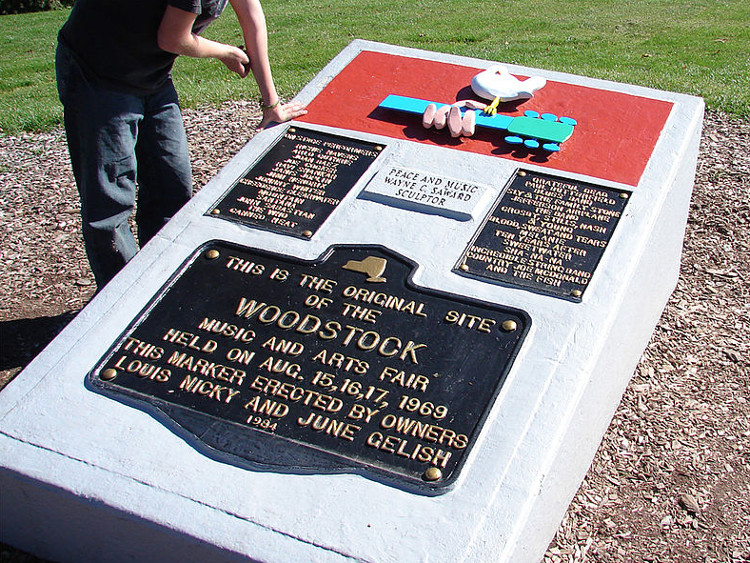 The clean-up effort was so effective that the subsequent archaeological study found very few artefacts clearly associated with Woodstock. 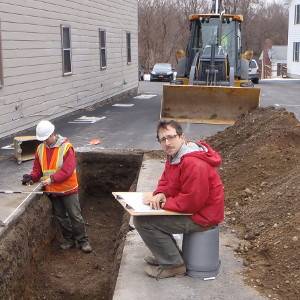 Section Editor for Archaeology. Blogs for A Complicated Past.

Corey is PopAnth's Section Editor for Archaeology. He is an archaeologist and outreach specialist with New South Associates, Inc. in Stone Mountain, GA. As a cultural resource manager, Corey’s experience covers thousands of years of North American humanity, from Late Woodland period encampments to 18th-century cemeteries for enslaved Africans and Native Americans to early 20th-century shirt and collar factories. Corey blogs at A Complicated Past about archaeology and history and their application to our modern world.

The Making of Home

Barefoot in Babylon: The Creation of the Woodstock Music Festival by Bob Spitz (1989, W.W. Norton & Co.)

The Road to Woodstock by Michael Lang (2010, Ecco)