Counting the Days in Dinners

There were very few clocks in Mali. Sometimes, I counted the days by the number of Diago water bottles that gathered by my bedside.[1]

Other times, by the reoccurring dinner of the week: salad with the floppy baguette from the corner store, salad with the baguette from the European style bakery, salad that involved too much Maggi[2] dressing and not enough of anything else, mushy chunks of potatoes with mild tomato sauce, my host mother's favourite rice dish with green fish sauce.

There were the days we ate soggy pancakes with bananas since my host family believed I must love pancakes as an American, or, the absence of a dinner which meant my host niece Nana and I would sneak off to the nearby bakery and eat mediocre croissants and overcooked peas that I insisted on to get our serving of vegetables.

The week, or weeks, where nighttime didn't really seem like a pause but rather a continuous, slightly slower paced version of daytime where talking, eating, sitting up, or just plain not sleeping were entirely accepted.

Sometimes, I counted the days by songs played off of my host siblings Nokia phones, my host mother's favourite, which became my favourite, Etta James's "I'd rather go blind."

Sometimes, I counted the days by breakfast foods: the days where Hany made me eggs in the morning with diced tomatoes and onions, the days where I tried to buy oranges to eat for breakfast for the week and they rotted in my bedroom because of the heat.

There were the days where my host mother and I shared overly-ripe yet dry orange slices by the stairs to the roof, the days I copied my host mother's breakfast of diced tomatoes and vinegar on bread despite having previously hated raw tomatoes

The days I only drank powdered coffee and put way too much of it in a cup since it was weak then spent the whole morning way too buzzed, the days I ate leftover fried plantains with my host nieces, the days I ate what my married host sister liked to eat — rice cakes made from leftover rice dipped in powdered milk and sugar.

In 2011, I spent four months in Mali through a study abroad program and I both hated and loved every minute of it (or rather, the experiential version of a minute). I chose Mali because it was French speaking[3] (not quite true), hot (though I didn't realize hot meant 112 Fahrenheit, and even hotter under the sun), and because I had to write a petition to my university to allow me to go.

As a somewhat sheltered white, liberal arts student, I wanted to be affected by a place that was categorized under "tough living conditions for Westerns" by the study abroad department.

So, I got off the plane, said goodbye to my fellow study abroad peers who I quickly learned preferred to play cards together than explore the city, and more or less threw myself into the drama (both mundane and catastrophic, for better or for worse) of my Malian host family and friends.

I lived in Kalaban Koura, a neighbourhood on the quiet side of the Niger River that divides the city in two. My host family consisted of my mother, Maman, my sister Hany, 28, my brother Dra, 25, and my niece Nana, 10, and my nephew Papi, 13. These were the family members that lived in the house that I lived in. We also spent much time with my sister Mimi who was 22, recently married and pregnant, and my sister Fatouma who who had two young daughters, Safia and Coucou, who I would consider my nieces as well.

The concept of family in Mali is much more sprawling than the average American family. I grew unusually close to my family compared to the other American girls on my program, due to, I think, both my family and my openness.

In my last month and a half when I was working on my research project on how Malians experience their bodies in relation to sexuality, body image, death, spirituality, and many other facets of daily life, I spent even more of my time in the rhythm of and at the mercy of my host family’s plan.

You could say that I even forced myself, sometimes, to not run off to the slightly air-conditioned restaurant a cab ride away to read for an hour, because a big part of me knew that I had to experience "la vie quotidienne" if I wanted to do good research.[4]

So, oftentimes, I sat for hours, like my host sisters Mimi and Hany and my host mother, slouched over in the brightly coloured twine chairs fanning myself with whatever I could find, and I took naps after lunch like everyone else, and I ate quickly and with gusto like my Nana and host nephew Papi, and I mirrored the way that Hany and Dra washed their hands in the bucket before eating

I "showered" with our zero-pressure shower head three times a day to wash off the dirt and grime that comes with bathing in the heat, and I smushed into the beat-up car to drive across town just to say hello to Aunts and Uncles and cousins and friends who spent the whole time speaking in Bambara.

I roasted, de-shelled, and re-roasted pounds of peanuts with my host mother and Hany until my fingers felt arthritic. For one week, I gladly slept on the floor of a six-by-six foot room with my married host sister and her two little children and Hany since the room was vaguely air-conditioned.

I drank the tap water, I ate raw vegetables, and I rode around the city and into the villages on the backs of motos which I'm pretty sure was at the top of the "Things Not To Do" list I was handed at some point.

All in all, I tried as much as I could to immerse myself in the daily habits and bodily patterns of my host family and other Malians. I let their lifestyle seep into my body.

This is my account of my everyday experiences. But how does one put these into formal writing? Surely, as Elizabeth Challinor has discussed in another article, much of the experience is lost.

In Part II of this article (coming soon) I explore the extent to which embodied experiences can be translated into text.

I tried as much as I could to immerse myself in the daily habits and bodily patterns of my host family and other Malians. 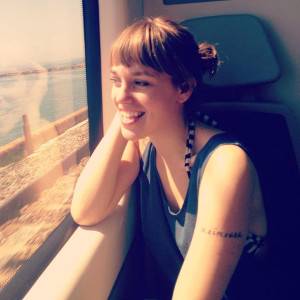 Abby is PopAnth's Section Editor for The Human Body. She works as a freelance design researcher/corporate anthropologist and runs her own mind-body wellness consulting business. Her undergraduate thesis, "Porous Bodies, Collective Agency: An Ethnography of Dance Possession Ceremonies in Mali" won the Carol B. Ohmann award for best thesis in the Feminist, Gender, and Sexuality Studies department at Wesleyan University.

What is your body story?

[1] Diago was the leading brand of 1L water bottles in Mali.

[2] "Maggi" is a powdered tablet MSG like substance that Malians put in pretty much every dish — salad dressings, sauces, rice, and even on mangos.

[3] French is the colonizers language. Most Malians, about 80%, speak Bambara. There are around 50+ other local dialects similar to Bambara that Malians speak. In fact, some schools are now being taught in Bambara as a backlash to the French over-take.

[4] Early on when I would get dragged to all day outings during my research month I'd feel insanely frustrated that I wasn't able to "work on my project" and that my family wasn't sensitive to the fact I had a huge research project deadline looming over me. Eventually I realized that all of these outings and long drives and conversations and even "idle" time were not only a part of my research, but central to my research and animated it in ways I never would have imagined.

The Anthropology department at Rice University has general information about Mali on their website.

Monique and the Mango Rains: Two Years with a Midwife in Mali, by Kris Holloway (2006, Waveland Press)