What has happened in post-referendum Greece?

2015 was undoubtedly a historical year for Greece. For the seventh consecutive year, Greece was in the world spotlight. But what the world didn't see was how the crisis changed Greek banking culture, propelling it into the digital age.

To begin with, in January, Sy.Riz.A. (that stands for Coalition of Radical Left), a leftist party, won the elections for the first time in the history of Greece, promising to bring hope and dignity back to ordinary people by ending the imposed austerity. Sy.Riz.A. formed a coalition government with a right-wing party, An.Ell. (that stands for Indepentent Greeks), and started to negotiate the terms of the Greek debt and the bailout package.

However, as you may already know, the negotiations lead to a dead end. As a result, Prime Minister Tsipras declared a referendum on whether people agreed or not with the proposed measures of the bailout programme by the EU and the IMF. (From 2007 to 2015 the Greek people have been asked to vote seven times, and Greece had 9 different governments.)

When the referendum was announced on Friday 27th June, people rushed to withdraw as much money as they could from ATMs. Many viewed the referendum as heralding a "Yes" or "No" vote on the euro currency and foresaw a possible Grexit from the Eurozone.

During that period, populism (both left and right wing) had reached its apogee as the media tried to manipulate the masses. After a couple of days the ATMs had transformed into a social space where people met and exchanged political views and opinions on what was going on while they were waiting to get their daily share of money.

However, on the first day before the imposition of capital controls, many people literally went on an ATM safari, queuing in front of ATM machines to extract as much cash as possible. As a result, by Saturday 28th June most of the ATMs had run dry.

On the following Monday, capital controls were imposed (which still apply) and banks were closed. ATM withdrawals were limited to 60 euros per day per bank account, and no money transfers abroad of any kind could be conducted (currently the limit is 420 euros/ per week and some money transfers abroad are allowed).

People started to hoard cash in fear of a possible GREXIT and started to use their debit cards wherever possible. They did not trust the banks and they were afraid that the money in their savings account would be automatically changed to a devalued national currency. Moreover, many businesses could not operate due to the restriction in capital flows, and so forced their personnel to go on unpaid leave.

What makes this cash-hoarding particularly interesting is that people in Greece continue to be cash-centric, even as the rest of Europe (and the world) moves on to digital payments, using their debit cards in everyday economic life transactions. cash, or "real" money, are deeply embedded in the way Greeks understand economy and therefore a certain economic culture is constructed upon cash and its value.

In Greece, e-banking services had little success, even in the younger generations. The majority of Greek people use cash in their economic arrangements, bypass banking structures that should make life easier. People in Greece are used to paying their rent, bills, and groceries in cash. It seems that they rarely think to pay using their debit card.

The elderly in particular were always suspicious towards banks and were reluctant to put their savings in a bank account. The younger generation used to make fun of them and their arguments for not trusting banks, from their simplistic views on financial issues and their belief that banks are the "real robbers," to extreme religious beliefs that link the digital economy with the coming of the Antichrist. But as the crisis showed, the elderly were not entirely wrong: banks are not always a safe place to keep your money!

Greece's cash-centric culture only began to change in 2007, when employers were forced to pay their employees via a bank and not directly with cash. Then, in 2009, a law was passed requiring commercial transactions above 500 euros to be conducted through banks.

However, these efforts have met with little success. Legal incentives, driven by the banks, failed mostly because many people confused debit with the very famous credit cards that led many private households to vast indebtedness and overconsumption the years before crisis.

Ironically, the crisis and the cash-hoarding that followed it drove people further into the world of electronic banking. According to data from the banks, from June 30th to July 22nd 2015 more than a million applications for issuing debit cards were received, while the total amount of economic transactions through e-banking (POS included) rose from 110 million euros to 280 million.

At the time of the crisis, many elderly people did not even have a debit card to withdraw money from ATMs, and so they had to rush out and apply for one shortly after capital controls were imposed and banks reopened in order to maintain access to their money. Use of e-banking also grew, since it provided unlimited money transfers between accounts within Greece.

This pushed small shop owners to start accepting debit cards using POS machines that the banks provide (each one costs around 300 euros). In addition to the equipment cost, banks charge businesses a relatively high commission for using their system, and many entrepreneurs try to avoid payments through POS or charge the commission to their customers.

Banks seized the opportunity to sell a new product, and various TV commercials have advertised the benefits of e-banking and the use of debit cards for both the seller and the buyer. For instance, some of the arguments used were: you don’t need to give change, you do not have to worry about forged banknotes, you do not have to carry cash, you can pay your bills at home.

Characteristically, in one bank advertisement, a middle-aged businesswoman who owned a clothes shop had her pensioner father dealing with her monthly payments. He has to be very patient and industrious in order to get the job done as he must deal with long queues and a very complicated bureaucracy.

The advertisement depicts how the Greek system operates as a whole. Citizens have to line up and wait a great deal of time to do simple things, such as make a payment. Banks and other offices, such as the electricity company, the tax agency, etc., are open to the public from 9:00-14:30, so people who are at work at that time cannot manage by themselves. (The opposite is also common in Greece: children take care of their elderly parents' payments, such as bills, taxes, rent, etc.)

On the political level, the government seized the opportunity to promote the use of debit cards for everyday petty transactions as a tool to battle tax evasion, since electronic transactions can be monitored by the banks and taxed by the state. As a result, government officials have suggested that, from 2016 onward, Greek tax-payers will have to use their debit cards in order to be eligible for tax relief.

On the antipode are those who still ideologically resist the monitoring and control of their economic life. I have encountered many Greeks who think about resistance when they bypass the banks and take measures to avoid their daily financial activities being monitored.

So, what has changed after the referendum? Did it cause macro-changes in the EU policies of dealing with economic crisis? The answer is no, at least for the time being. What has really changed in Greece and in peoples everyday lives is the progression of bankarization (see Deborah James, "Deeper into a hole?': borrowing and lending in South Africa").

In fact, the post-referendum era in Greece signals the increasing role of the banks in the regulation of the market for everyday petty commercial transactions. Nowadays, the banking system has paradoxically has accumulated more power in Greece than it has ever had before.

The so-called roll-back of the state, as many have conceptualized the neoliberal turn of the economy (See J. Peck, "Contructions of Neoliberal Reason"), happens not only in the provisioning of welfare, but also in tax collection. Banks now have the role of monitoring transactions and collecting taxes for the state.

Moreover, e-banking allows Greek banks to cut down on their employees and to shut down their physical presence. Many political and social scientists as well as many economists have exposed the role of the banks in the global economic crisis. Similarly, in the minds of ordinary Greek people, banks were always thought to be responsible for the economic crisis and, before that, for many of society's ills.

In fact, public sentiment against banks is so strong that most protests target them in some way. Throwing molotovs at banks, or burning or otherwise destroying an ATM machine, is considered a revolutionary act of resistance. In the 2008 riots, the killing of a 15-year-old teenager, Alexis by the police fired up general discontent towards the established political and economic system. With their updated digital presence, banks are more resistant to such attacks.

I will finish this article by sharing one of the most ingenious and poetic graffiti artworks on the streets of Athens. This graffiti appeared shortly after the long queues in front of the ATM machines last summer. It can be translated as "ATM Society", but in Greek it could also be read as "ATiMi Koinonia" [1], a famous line from a 1960s Greek comedy that is widely used in the Greek everyday language, and which best translates to "Valueless Society."

Ironically, the crisis and the cash-hoarding that followed it drove people further into the world of electronic banking. 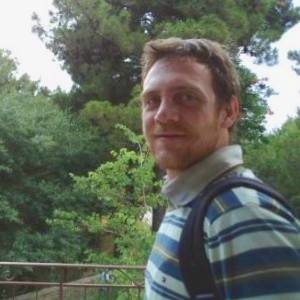 Stamatis Amarianakis is a PhD candidate in Social Anthropology at the University of Barcelona. His research investigates grassroots responses to the Greek crisis in a country town.