One year ago, pedestrian streets and commercial crossroads in Chinese cities were suddenly teeming with hawkers selling plastic sprouts, leaves, flowers, fruits and mushrooms attached to a hairclip.

"They are all five kuai, you should get one of the big ones instead of that one," lectures me one street seller in Shanghai, as I pick a small two-leafed stalk. "It's ok, I like this one," I reply as I give her a 5 RMB banknote. She seems baffled by my diminutive choice.

A few months later, I encounter a similar assortment of artificial vegetation on a wooden plank in Hong Kong's Temple Street market. Here they sell for 10 HKD, but maybe that's because I'm a foreigner and I'm not really in the mood to bargain.

At the end of the year, I see a basket of the same plastic fruits and flowers for sale in a Taipei night market, along with other miscellaneous items–this time, at 50 TWD per piece.

The sight of strollers sporting grass stalks, berries, and lily pads bobbing on their heads did not go unnoticed by local media and international reporters, and briefly flared out on global news outlets as the latest weird China phenomenon.

Initially, it was described as a Beijing-born fashion trend, derived from the practice of cosplay and which was setting "the standard for the nouveau​ cute."

Then, interpretations linking the plastic plants to traditional Chinese folklore or a subtle critique of pollution were quickly dismissed in favor of a generalized aesthetic meaninglessness: "it's really just a thing because it's cute," and everybody is doing it although "nobody quite knows why."

The head-worn greenery, known in Chinese as 头上长草 (toushang zhang cao, "grass growing on the head") and easily obtainable on e-commerce websites for a fraction of the street price, wasn't the first example of a street-sold accessory piquing the curiosity of onlookers (which is, as a matter of fact, the main reason these accessories sell in the first place).

Ever since the spring of 1991, when the "cultural T-shirts" with silk-screened humorous statements created by artist-entrepreneur Kong Yongqian and chronicled by Geremie Barmé took Beijing by storm, the commercial street culture of Chinese cities has cycled through a rich repertoire of seasonal merchandise, including foam hats, animal ear circlets, handheld fans, oversized smartphone cases and selfie sticks.

These objects often carry with them stories of fortuitous product design, socio-technical sensibility, quick-witted entrepreneurship, and flexible commercial schemes. It might be a merely tangential coincidence, but Hong Kong arch-tycoon Li Ka-shing built his empire on the manufacturing of plastic flowers.

So, is there something more to the "grass growing on the head" than we see with other merchandise carefully paraded on the stalls of commercial streets in Chinese cities?

Most importantly, its dissemination beyond the immediate visual environment of the commercial street, and onto the personalized feeds of social media and mobile apps: after buying and wearing the plastic plant of choice, the first action is often taking a selfie with friends and sharing it among a larger group of contacts online.

This form of mediation allows the head-greenery to move beyond the status of funny merchandise and become a "micro-trend," a fad or a cheap accessory flaring up too quickly and resonating too obviously over social media to become fashionable, but often recuperated in retrospect by the fashion industry.

In her discussion of micro-trends, Natasha Stagg observes some common misunderstandings of their mediated dynamics:

"the idea that people (meaning a relatively large percentage of the population) go into a frenzy over some new street style phenomenon is inaccurately reported. Over the past decade the only difference that the internet has made in terms of how we view fashion trends is to help reporting become much easier to monetize, and so sensationalist journalism has become more accepted."

But there is also something more. When I first saw the artificial foliage adorning the heads of some passers-by, I couldn't help but think of a particular captioned image I had written about years before.

The humorous picture, shared on Chinese social media platforms, was a play on words on the name of a popular textbook character (Xiao Ming, "Little Ming"), and his plant-augmented version (Xiao Meng, "Little Cute").

This joke played on the Chinese term 萌 meng, literally meaning "bud, sprout," which was imported in Chinese as the adjective "cute" from its Japanese usage in the locution 萌える moeru ("to burst into bud"), itself a probable mistyping of the homophonous 燃える moeru ("to burn").

As carefully detailed by authors such as Hiroki Azuma, Thomas Lamarre and Patrick W. Galbraith, moe has come to indicate specific aesthetic elements of character design in Japanese comics and animation–animal ears, eyeglasses, antennae hair–as well as the affective response their cuteness elicits in consumers.

A Chinese character originally meaning "sprout" had been recuperated in everyday languaging through Japanese otaku jargon and materialized as wearable sprouts, themselves described as magical objects dedicated to mai meng, the social production of cuteness.

Terence S. Turner opens his 1980 study of the dressing codes of Kayapo people with the catchy statement: "Man is born naked but is everywhere in clothes (or their symbolic equivalents)." Through discussions of body painting, lip-plugs and penis sheaths, Turner highlights how consistently humans treat the surface of their bodies as both a biological and a social boundary.

Besides noting the differences in bodily adornments among people around the world, he illustrates how these function as a "concrete medium" encoding, and encoded by, socialized notions like beauty and wealth–or, why not, cuteness.

The point of studying how people adorn their "social skins," Turner argues, is to go "beyond the superficial recording of such exotic paraphernalia to inquire into the system of meanings and values which it evokes for its wearers."

By following the hair-borne florae in its circulation across urban streetscapes and social media feeds, untangling the linguistic transactions behind its commercial materiality, and explaining how one can buy plastic sprouts in order to sell cuteness, I hope to have put this suggestion in practice.

There are a couple of advantages to doing anthropological research on digital media and everyday life. The first is that a sustained engagement with field sites allows the ethnographer to follow phenomena along the long tail of their dissemination: not having the pressure to produce a hot take about the latest observation is a precious freedom, and rewards analysis with perspective and depth.

The second is that by investigating the role of trivial objects one is inevitably drawn into the continuous mediation of their materiality: through use, and across "cultures" and "languages," a fictional aesthetic element might become a slang term, then a street accessory, then an animated GIF, and so on. In this essay, I tried to explain why and how this matters.

Is there more to the "grass growing on the head" than the other merchandise carefully paraded on the stalls of commercial streets in Chinese cities? 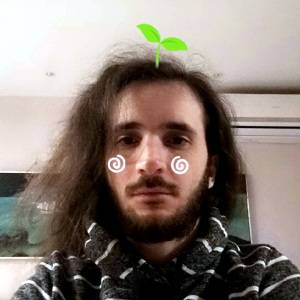 Gabriele de Seta is a postdoctoral fellow at the Institute of Ethnology, Academia Sinica in Taipei, Taiwan. His research focuses on digital media practices and vernacular creativity in contemporary China. He also experiments with ways of bridging anthropology and art practice. More information are available on his website.

Thanks to Michelle Proksell for providing a plastic sprout selfie.

In the red: On contemporary Chinese culture, by G.R. Barmé (1999, Columbia University Press)

The moé manifesto: An insider's look at the worlds of manga, anime, and gaming, by P.W. Galbraith (2014, Tuttle Publishing)

The anime machine: A media theory of animation, by T. Lamarre (2009, University of Minnesota Press)