Eighteen months into my travels around South America, one key event has forced me to re-think what it meanst to be a backpacker. And before you ask, no, I didn't get robbed, nor did I share a mind-altering experience with fellow couchsurfers.

Rather, it all boils down to the surprising amount of attention I have been getting from other tourists, particularly hikers, thanks to my new boots.

About six months ago my Vasque hiking boots broke apart while in Venezuela. After a day hunting for new boots that fit me I finally stumbled upon a pair of Merrell boots, and have been happily wearing them ever since.

In fact, while I considered Vasque to be a high-quality maker of hiking gear I have received more compliments over my new Merrells by travellers from all over the world (they have often proven to be a conversation starter) than any other of my conspicuously-branded products.

And of course, as with all serious boots, they come with patented Vibram soles—Vibram being somewhat of a by-word for quality and durability.

The irony is that neither I nor anyone I have asked actually knows what the physical difference is between a regular rubber sole and a Vibram one. Yet we are all convinced beyond a doubt that they are much more durable and efficient than any other form of sole, because that is how they are sold to us.

Vibram is just one word of my now extensive consumer vocabulary which I use to navigate the world. Rip-stop fabric, 3000 vs 4000 waterproof ratings, the difference between GTX and GRX linings, Everlast-treated leather, softshell or hardshell, photochromatic lenses, factory or manual stitching seals, eternal debates over the effectiveness and risks of trekking poles, and a sea of brands from Asolo to White Sierra saturate conversations in youth hostels and on the trails.

What's interesting about this brand-consciousness is that it often accompanies a strident anti-materialism among hikers and other backpackers. Here in South America, backpackers are often searching for a more 'authentic' experience outside of tourist bubbles. They express disdain for big cities and their rampant materialism, and a yearning for some more 'real' existence. Their aversion can almost reach self-hatred, as almost every single backpacker expresses disdain for the tourism industry as a whole and certain forms of tourists–the Japanese being one of the most common targets.

Despite their anti-materialist proclamations, backpackers use their consumption choices to project themselves as travellers seeking real experiences, as opposed to tourists who are content with taking happy snaps of famous landmarks.

But their purchases are not always the most practical choices. The backpack is an obvious status item, one that signifies inclusion among a certain group of tourists, with its own brand hierarchy, even though many of these backpackers will never go hiking and could probably travel much easier with a regular suitcase or bag. Hiking boots are equally much more common than hikers, while those more experienced in trekking will display horror at anyone attempting even an easy hike in regular sneakers.

The camera is perhaps the most conspicuous and obligatory item of all consumer gear worn by backpackers. In order to be a 'real' traveller, you should own an SLR camera, and preferably a Canon. Whatever you do, don't leave it slung around your neck, as this is the most obvious symbol of the tourist. Be vigilant about not taking too many photos, lest you be accused of being 'Japanese'.

I particularly recall one Chilean backpacker I met in the north of Brazil, who had spent a year hitchhiking through the continent. She was travelling with no money in the bank, often selling painted portraits of people or bracelets and even begging in bus terminals to fund her trip.

Her glasses had broken three months earlier, and she didn't have the money to repair them, yet she still held onto her top-range digital SLR camera–in fact, as we were catching a boat down the Amazon River she could not make out the dolphins in the background without her glasses and had to photograph everything around her just to be able to see.

These backpackers aren't just being hypocritical: all human beings use possessions to express who we are and judge others. When we meet someone for the first time, we size them up and decide what kind of person they are based on their words and actions, but also on what they are wearing and carrying with them. The things that people choose to buy for themselves, or that others have bought for them, can tell us a lot about who they are.

In the face of the insecurity of travelling, where we are constantly meeting new people and having to assess them quickly, certain products and brands form a material discourse we are intimately familiar with and understand even in a foreign environment.

While at times this shared jargon is upset, by, for instance, Argentine backpackers who do not travel with or recognise European or U.S. hiking gear, or a Scot who insisted that the Australian company Kathmandu made high-quality and durable goods when in Australia it is seen as exactly the opposite, in general backpackers can commune and distinguish between each other based on this consumer language.

Whether it's a Canon camera or Vibram soles, backpackers are a great example of how even anti-consumerism is played out through consumption.

What's interesting about this brand-consciousness is that it often accompanies a strident anti-materialism among hikers and other backpackers. 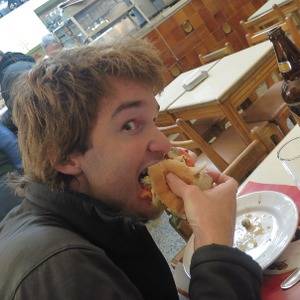 Can typically be found crafting his art on a Mexican couch, at a Brazilian protest, or in a Bolivian jail.

David Thompson has been travelling around South America since he completed his final-year undergraduate thesis on cosmopolitanism and consumption in Latin America at The University of Sydney, Australia, in late 2010. He has recently published an article, Cosmopolitanism Sits in Places: Consumption and Cosmopolitics in Latin America, in the International Review of Social Research. David has blogged about his ethnographic observations on the Occupy Rio movement, materiality and cosmopolitanism, and the vicissitudes of tourism on the Material World Blog and on Erin B. Taylor’s blog.

More about ways of being a tourist