It's safe to say that the average internet product review doesn't include things like "What power luster would not enjoy being able to unilaterally order the deaths of people anywhere in the world?" and "…you can't spell slaughter without laughter!" But if you've checked out the Maisto Fresh Metal Tailwinds drone toy on Amazon.com, then you already know it hasn't spawned your average product reviews.

To date (8/5/2013), the Maisto drone toy has 244 reviews on Amazon. Of these, only one attempts to offer any actual review of the product itself; the other 243 can be broken down into pro-drone/anti-protester comments (11) and critiques of the Obama administration's drone policies (232). The overwhelming majority of which are bitingly sarcastic and satirical. This toy may be listed for children ages three and up, but it's adults with a political bone to pick who have the most to say on the subject.

The various comments the Maisto toy has generated represent a prime example of so-called "review bombing" or "Amazon bombing," when a substantial amount of reviews are left for a product that evaluate wider ideas represented by the product rather than the product itself. Review bombing has been documented under many guises, the most well-known of which is the "customer review comedy" found in Celia Emmelhainz's PopAnth article on the snarky celebration of inane Amazon-listed items such as the Hutzler 571 Banana Slicer and the Three Wolfs Moon t-shirt.

Review bombing has also occurred as a form of bullying, such as when gamers targeted psychiatrist and media personality Carole Lieberman's books on Amazon in retaliation for her comments that video games de-sensitize young people to violence. The case of the Maisto drone toy is unique, however, in that represents review bombing as a form of political dissidence.

Merging politics with shopping is hardly a new concept—so-called "political consumerism," defined by Shah et al. as "…the act of selection among products and producers based on social, political, or ethical considerations" [1] has been used to influence everything from the American Revolution to so-called "freedom fries."

Participants make use of political consumerism in order to force changes in market/institutional conventions and processes, address the companies or institutions behind those practices, and attract public attention to their cause. To do so, political consumerism has traditionally engaged in boycotts or "buycotts," the anti-boycott in which consumers purchase products in support of a company's market practices.

The case of the Maisto review bomb shares much in common with traditional political consumerism. First, both are in response to what Micheletti et. al identify as the "politics behind products" ,[2] such as the Obama administration's drone policies rather than the six-inch plastic toy itself (e.g., this review: "This drone needs to come with a replica Pakistani wedding with one enemy of freedom in the wedding party. Then you can have fun…blowing up a wedding to get to your target just like the president" ).

Second, political consumerism requires the infusion of some market response with political meaning that acknowledges the product as existing within wider political, social, and economic contexts. In undertaking this action, however, the Maisto review bomb diverges from traditional consumerism by means of its methods. Because the target here is government drone policies rather than Maisto or its products, neither the boycott nor the buycott apply—indeed, the single online petition urging Maisto to stop producing the toy has barely raised any signatures despite the number of bad reviews. Instead, market action has taken the form of the review itself.

Although Amazon's guidelines request that users concentrate on the product's technical features, reviews of the Maisto drone toy do so sarcastically, such as when one reviewer noted, "…I was initially disappointed. I was expecting it to be, if not life-size, at least large enough to take out a hospital or a baby milk factory."

Another warned, "A toy, but it's still quite dangerous. My 7-year-old son launched this in the school playground and hit a Pakistani kid in the eye. The things just can't help themselves." Reviewers thus effectively insert political protest into an action intended by Amazon to be distinctly a-political.

What's more, the toy's digital existence as mediated by the Amazon.com platform has allowed participants to take things a step further and turn the toy's page into a public forum within which to examine the politics they protest, thanks to users' ability to vote and comment on other reviews. A cursory examination of the resulting discussions turns up everything from debates on the concept of "war" to some self-reflection of the review bomb itself, demonstrating full-fledged digital engagement with the politics behind the product.

This all begs the question: what is the point of the review bomb? As far as the aforementioned goals of political consumerism are concerned, it's nearly unimaginable that 232 sarcastic reviews will have any bearing on the institutional practices behind them (i.e., current drone policies). However, reviewers have been fairly successful in two regards. First, their collective satire has to a certain extent piqued public attention and generated discussion, especially among the numerous online news sources (including Business Week, InfoWars, The Daily Mail, and The Huffington Post) that have all run articles about the review bomb.

Second, this review bomb can be seen as at least partially addressing one of the major criticisms of traditional political consumerism: namely, that it's only available to people with enough capital to purchase more expensive goods in the name of ethics. By virtue of the digital context within which it is embedded, review bombing opens up participation to more people across socio-economic levels by only requiring access to an internet connection.

In the end, the Maisto review bomb is not just a digital extension of political consumerism, but a form of political consumerism which is mediated by and adjusted to the possibilities of the digital. It may not be the Hutzler 51 Banana Slicer, but the Maisto review bomb reveals much about the internet's potential to turn the unexpected into a platform from which one can take part in and protest wider political issues. 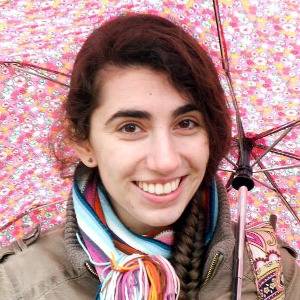 Language and experience in Central Mexico

Tina got her BA from Rutgers University in New Brunswick, NJ, and her MA from Georg-August-Universität Göttingen, Germany. She completed fieldwork in in Central Mexico on language and the subjective experience. Tina is now living in Khovd, Western Mongolia, where she teachs English at the local university.